Friends at the End, a UK membership organisation campaigning to change the law to legally allow Assisted Dying in Scotland and the UK, has appointed its new convenor following its annual general meeting.

Peter Warren is now part of the six strong council that work closely with the public and MSPs to bring about a change in the law regarding end of life choices.

Friends at the End believe that medically assisted dying should be available to all mentally competent adults with either a terminal illness or an incurable condition causing hopelessness and unbearable suffering, with no reasonable alternative to relieve it, providing this is their own persistent request.

Amanda Ward, CEO of Friends at the End, said:

“We are delighted to have our new council in place. We are all working towards the same goal, to see a change in the law to legally allow assisted dying in Scotland and the UK. It’s something that affects everyone and now more than ever, we need to be talking about it. We truly believe that assisted dying is the last taboo and one that we want the government to act on to see change to allow people the right to make a choice about their own dignified deaths.”
The announcement of Peter’s new role took place at the Friends at the End AGM which was followed by the debate, The Last Taboo, Assisted Dying: Scottish Council of Human Bioethics v Bioethics Committee of Catalonia.

This debate welcomed 50 delegates to hear from Dermot Grenham of the Scottish Council of Human Bioethics and Nuria Terribas of the Bioethics Committee of Catalonia on their case for and against Assisted Dying. 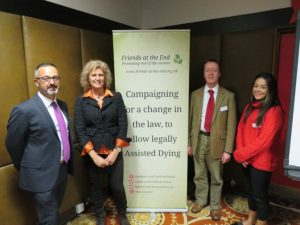 Peter worked for 16 years in the office of Margo MacDonald MSP and supported the preparation of two separate Bills on Assisted Dying and now lives in Catalonia. He has worked closely with legislators, campaigners and other organisations to promote the idea of people having a choice about their dignified death.

“I’m thrilled to be part of the Friends at the End council. I hope to bring my years of experience, especially working in Catalonia where they recently voted to legalise Assisted Dying, to the organisation as we work towards a change in the law here.

“I’m keen to also continue to strengthen our links with politicians, as well as the wider public to inform them of the importance of discussing something that will affect us all and ensure we all have the right to a dignified death.”

See all our news items